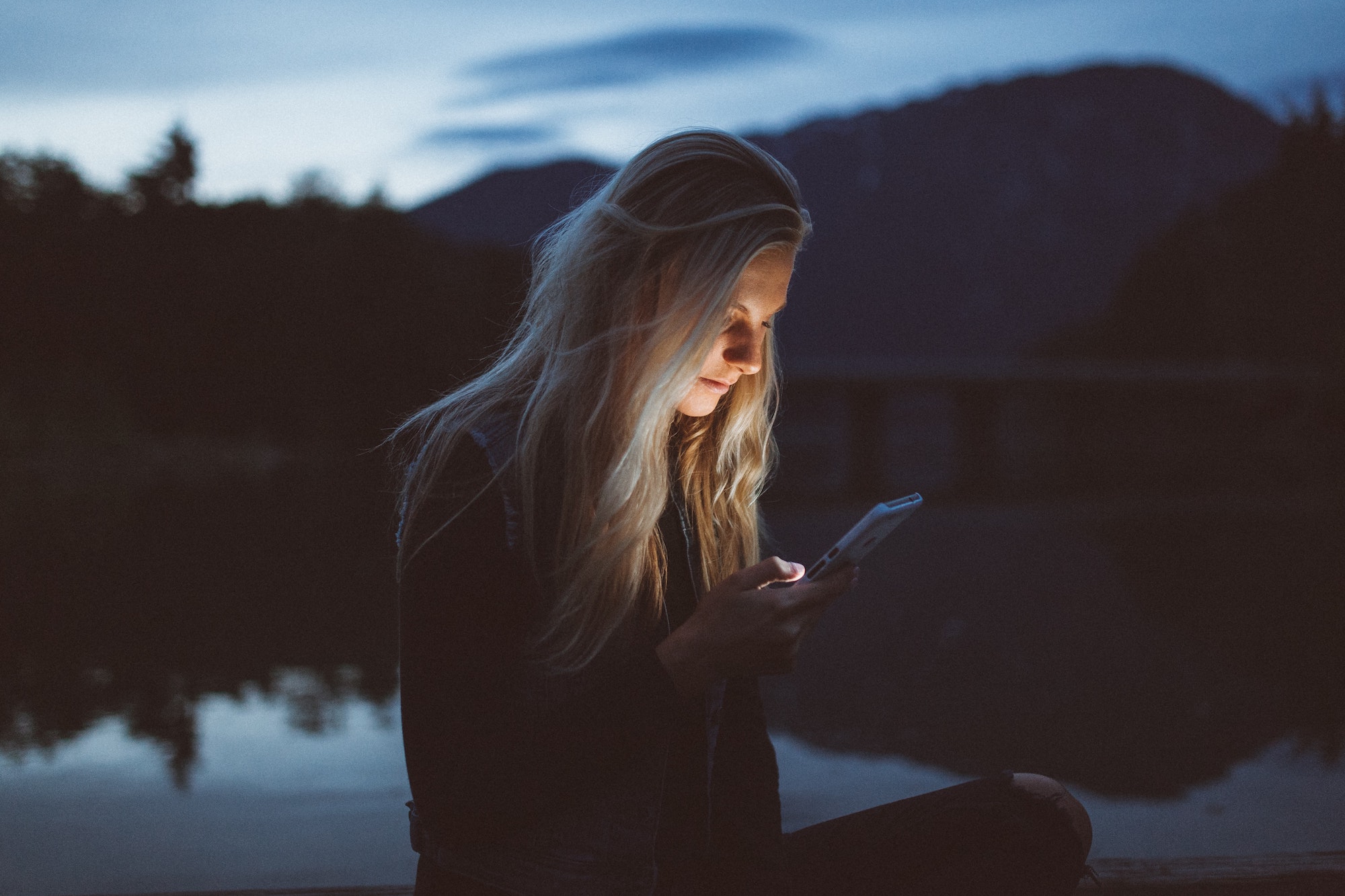 Phones get a lot of bad press right now, in part because people are using mobile phones more than ever before. However, when used in the right way, our phones can be invaluable learning tools. In fact, Cerego users actually learn and retain more on mobile.

Cerego's adaptive learning platform leverages cognitive science and machine learning to build an optimized schedule for every user, triggering reviews just as memories begin to fade. But there's a difference between having a schedule, and actually following it. Since timing and frequency are critical to building retention, making the material as accessible as possible is key.

That’s why Cerego offers mobile apps for both iOS and Android, which notify users when they need to review material, and allow them to do so conveniently, wherever they are. 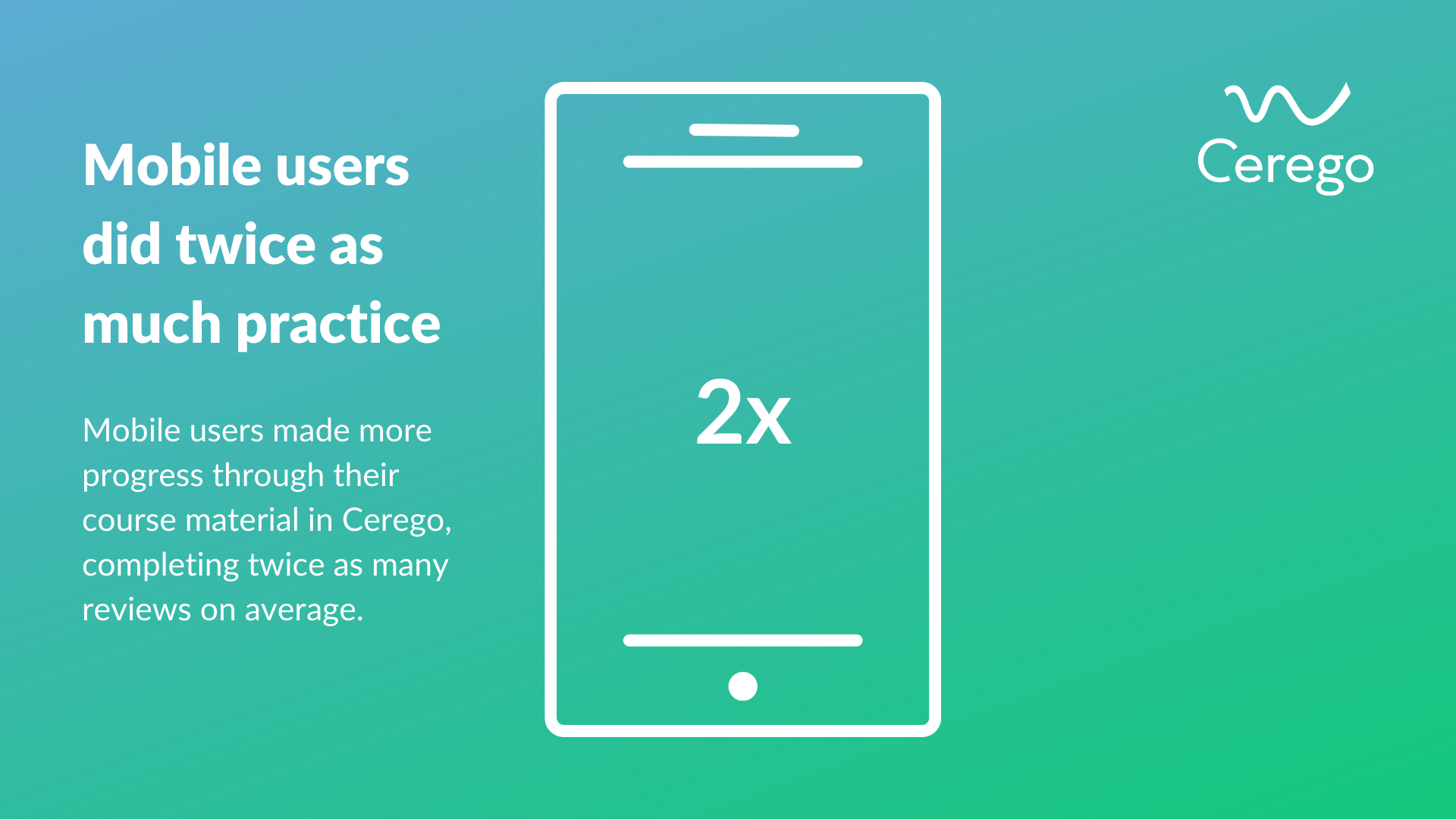 Desktop computers, or even laptops, tend only to be used at specific times of day. But people generally have their phones available—a behavior that better allows the ‘little and often’ strategy of distributed learning. Also, emails are answered twice as quickly from a mobile device as a desktop or laptop, and mobile learners may further benefit from push notifications—short, visible reminders that are well suited prompt timely responses, such as learning on Cerego.

The results are that people using Cerego's mobile apps interact more with the platform—that is, they practice or study roughly 2x as much as desktop-only users. And those additional interactions pay off. In fact, the additional interactions with the material means that mobile users learn more than 2x as much as those using only the desktop platform. That means that not only are mobile learners studying more, but also that every minute spent learning in the mobile apps is actually more effective than on desktop computers. 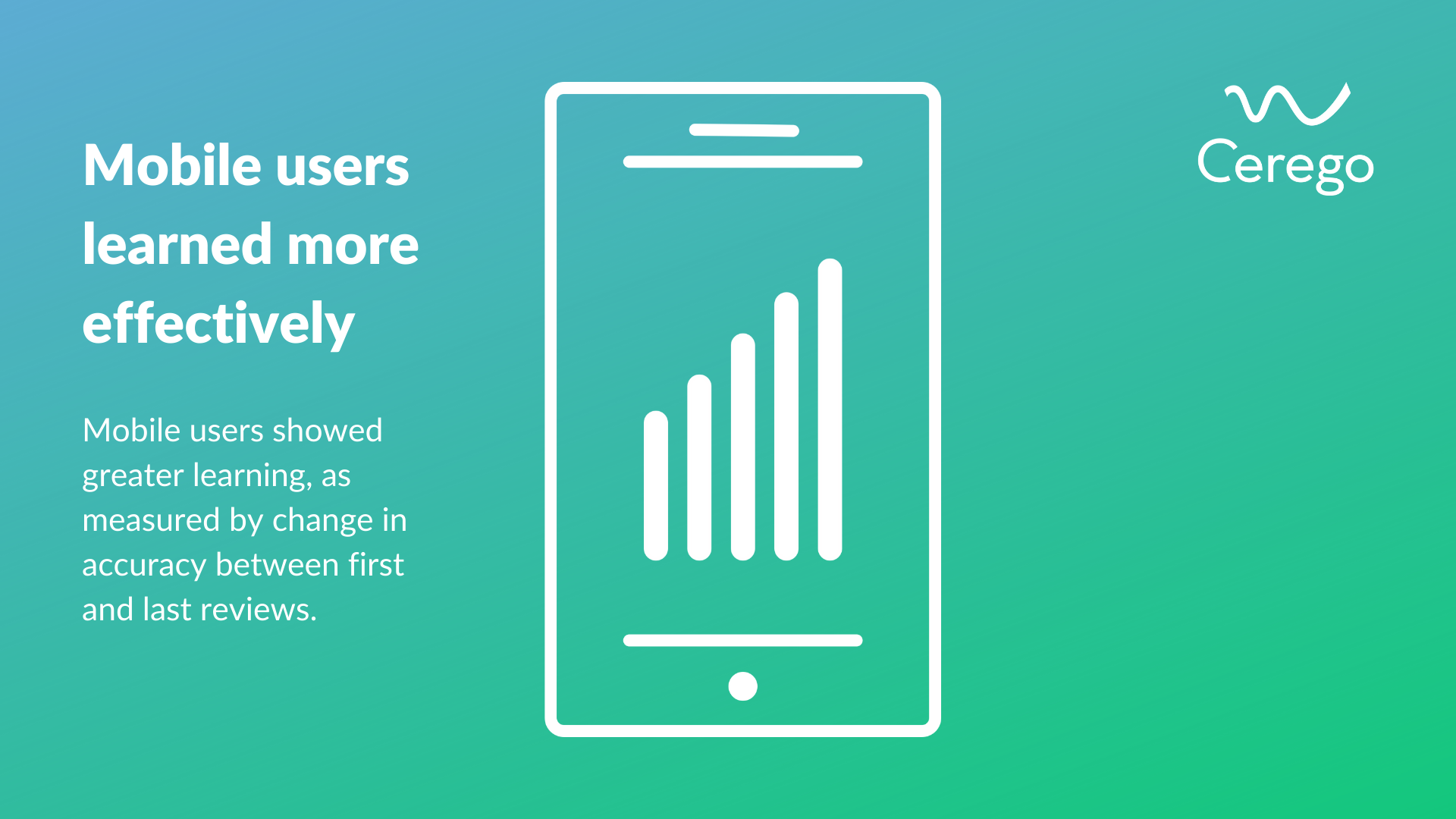 In a 2017 survey of anonymized Cerego data, we found that despite being in the same course with similar requirements, mobile learners completed more than 2x the number of total reviews (quizzes) as their non-mobile counterparts. From our study:

This reflected both wider and deeper learning—mobile users learned an average of 255 concepts each, compared to 173 for students who didn’t use our mobile apps, and also completed more reviews for each concept they learned (5.2 vs 3.8).

When and how did this extra practice happen? Interestingly, despite doing 2x the total practice, mobile learners tended to review in shorter study sessions.

This pattern of frequent, short practice—the 'little and often' concept mentioned above—is a more effective approach to learning and building retention, sometimes called the primacy effect. It helps users to refresh fading memories at the optimal time for them, supporting the process of distributed practice. Short sessions may also help learners to maintain good focus, thereby facilitating effective encoding and retrieval of information. 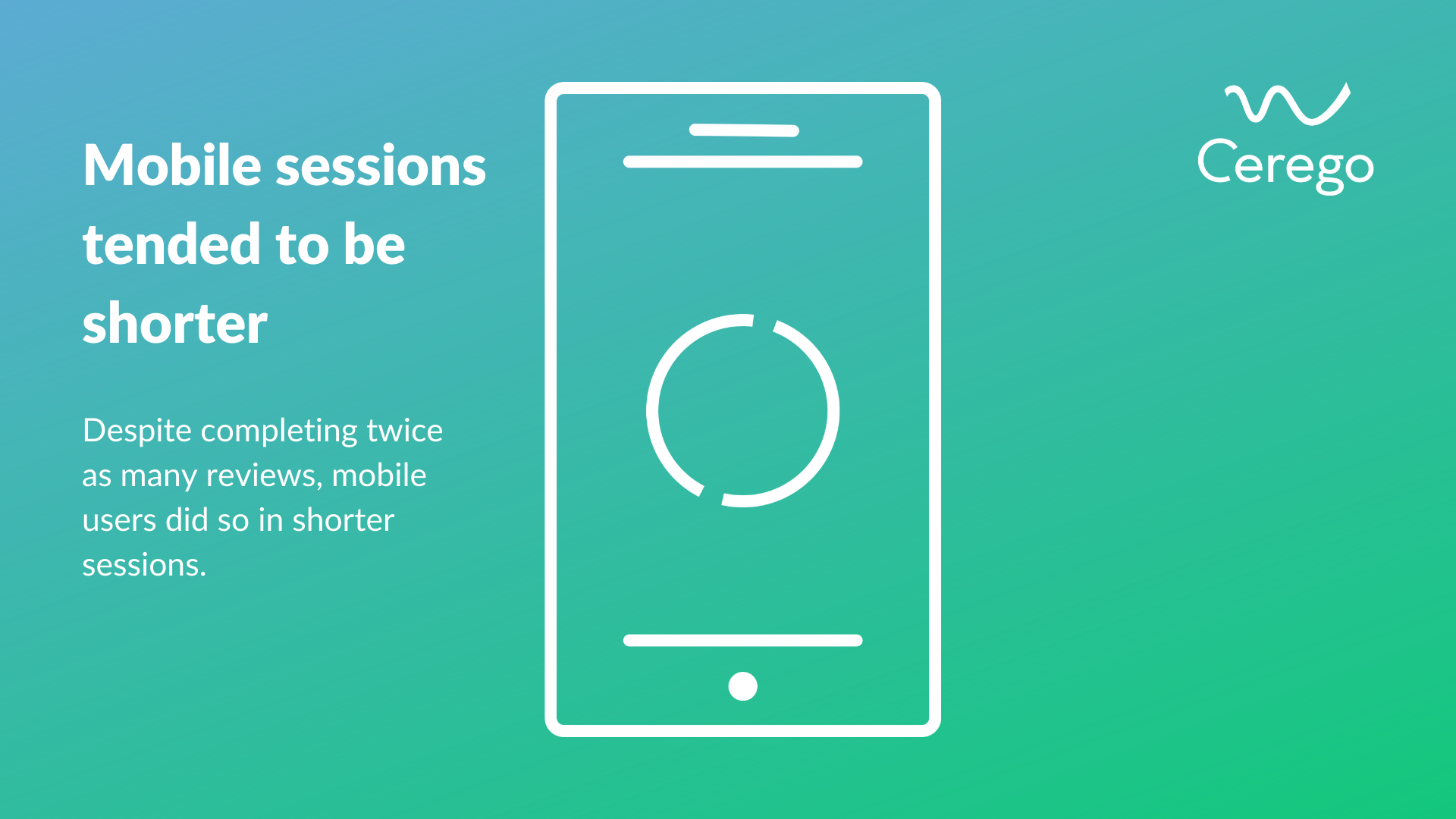 Another advantage of short and frequent reviews is that it makes it easier to stick to a schedule—even if you only have a few minutes, you can make a meaningful difference for learning and retention. And, since Cerego tracks the ideal time for each memory to be reviewed, a user will be automatically provided with a review session that prioritizes the memories most in need of review at that moment.

That timing makes a difference. Indeed, we found that our group of mobile learners were statistically more 'on time' for their personalized learning schedule than non-mobile learners.

We have consistently seen that closely following review time recommendations, and studying in shorter sessions, are both strong predictors of more effective learning and retention on our platform. So, it was little surprise that our mobile group also showed significantly greater learning after they started reviewing in Cerego, gaining more accuracy by later reviews.

Though our mobile users didn’t start with any more knowledge than their peers, after learning in Cerego in smaller, more frequent doses, and sticking more closely to their schedules, they showed measurably stronger improvement.

The power of mobile

Smartphones are ubiquitous nowadays, and we are only beginning to understand their potential roles and applications in learning. We’ve seen here how the study habits that mobile devices allow can lead to more effective learning, and more generally mobile devices may inherently offer greater access to learning opportunities.

Data from flashcard company Study Blue revealed that their learners frequently studied on their phones in bed after waking up (52%), or before going to sleep (46%), and while in transit (76%). These transitional moments contrast with traditional ideals of studying having a ‘proper’ time and place. However, our data suggest that encouraging short practice sessions in any context may lead to better learning outcomes overall, marking the potential for mobile apps to be among the best educational software available.

Our primary mission is to make learning measurably more efficient and effective. Mobile may be the ideal way to access the Cerego personalized learning platform, where short, frequent interactions and timeliness are key predictors of better learning.

Download our mobile apps for iOS or Android and see how your relationship to Cerego may change.

To learn more about how Cerego works, contact us.